Lords Ladies and Buccaneers at the Pittsburgh Renaissance Festival

The Pittsburgh Renaissance Fair was held at the rustically beautiful Mount Hope Estate and Winery from August 3 to October 27.
http://www.parenfaire.com/ 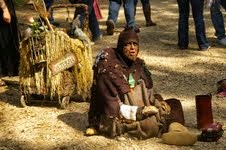 My lords, Ladies a fun time is had by all, The Black Knight was vanquishing all contenders, with the Herald proclaiming all of his mighty deeds. There were Colleens and Lassies, galore to feast the eyes upon, all amply built. There were Lords a leaping with their finery and swords ready to protect all. We had our own Quasimodo sitting in the streets begging and charming the ladies. A scourge to the gentlemen! 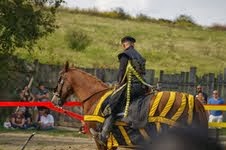 We had both male and female Musketeers, walking around looking for drink and some fun. Belle Dancers and Jugglers, Irish wash women, Troubadours abound to entertain and delight all who see them.

There were family friendly week-ends especially the 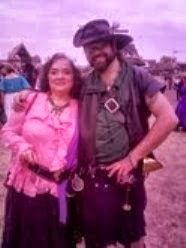 Pyrate School for Nipperkins – The yunguns, the would-be buccaneers had a chance to learn how to look like a pyrate, talk like a pyrate “Arrrgh!” and brandish swords like a pyrate.

The Four Corners Pyrate Treasure Hunt - A great pyrate treasure was said to have been buried in Mount Hope, and the Queen asked for the help of yunguns and family members alike in retrieving it. To find the  Treasure all would be Treasure Hunters  went to the Informistress Booth inside the Castle Gates, for a treasure map. After finding all the clues, they proceeded to the Chess 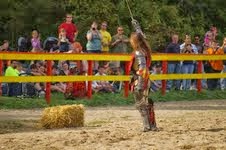 Boad at 5:30 of the clock to speak the secret password and open the treasure chest. Great family fun! 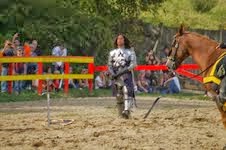 Dedicated to Romantics of all ages! Knights and Rogues, Ladies and Wenches, even Queen Elizabeth were in the mood to woo and be wooed. You might have found your love there on the shire.

A Renewal of Love Ceremony - Everyone was welcome to reaffirm the loving commitment they have sworn to each other. This was quite a tear jerker in many cases.

Wooing Contest - Chivalry is far from dead, and the Queen had decreed there should be a competition of all things romantical to prove it. Knights tested themselves in feats of woo against the Shire's most famous lovers.  Some formerly thought “not so romantic” quite surprised their friends and significant others.

Men in Tights Competition - All gentles do know that there be no part of a man more appealing than his calves, and the Shire of Mount Hope found the best (or, at least the most eager) judges for this hilarious and competitive "showing." 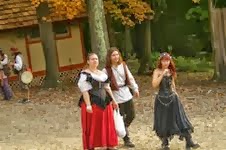 So next year take someone and hold them tight for a trip back through time, to the days of yore, where Kings and Queens ruled, where knights came to rescue the damsel. Where you can purchase a memory or two to take home that special day spent with the family or that special someone, for a few coppers to be transported away from today.

Robert W Lardin Jr. is a Templar/Reiki Master, He specializes  in Holistic, Metaphysical and Healing. He is  also a Certified Hypnotist. The name of his business is Neghibor Bob's Reiki.  He is also known as: The Kilted Man.  Can you guess why?