Roving Pittsburgher Review, "Salome", Not Just About "The Dance of the Seven Veils."


As the curtain goes up on the Pittsburgh Opera's 2016 presentation of Strauss's " Salome" the audience was immediately drawn in by the exquisite set design of Boyd Ostroff. Creating the illusion of fluidity and change in a one-act Opera is not easy, but between the beautiful bas-relief of the set design and the ever-changing mood reflected in the moon, the stage becomes a vibrant part of the production.

Based on the play by Oscar Wilde, Salome reimagines the biblical story of King Herod, his stepdaughter Salome and John the Baptist - Jochanaan. "Salome" provides one interpretation of why exactly Salome forced Herod to give her John the Baptist’s severed head on a silver platter. 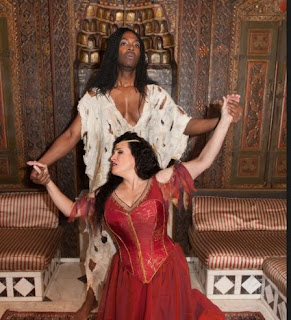 Salome, Op. 54, is an opera in one act by Richard Strauss to a German libretto by the composer, based on Hedwig Lachmann's German translation of the French play Salomé by Oscar Wilde. Strauss dedicated the opera to his friend Sir Edgar Speyer.[1]

Salome is not an opera that needs much help holding the audience's attention, however, steeped as it is in some of the vilest characteristics of the human race lust, incest, and necrophilia. It is truly amazing that the opera was not banned in major cities when originally released because of the notorious dance of the seven veils. Nudity pales in comparison to the desires of the main characters of Herod, Herodias and Salome.

Patricia Racitte's Salome was outstanding, not only for her musical ability, but also for the physicality she brought to the role. When she is on stage she rules the stage and she holds the audience's attention throughout her performance. Her actions seem neither forced nor stilted, but create a moving montage of lust, anger and desire. This was her Pittsburgh debut so we hope to see her again. 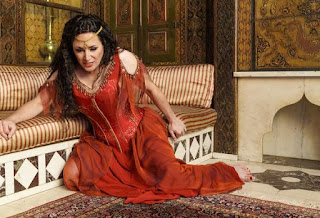 “Dance of the Seven Veils” could have been long and painful but was so expertly choreographed by Michele de la Reza of Attack Theatre that it held the audience spellbound.

Jonathan Boyd as Narraboth and Two-time Grammy winner Nmon Ford as Jochanaan both gave excellent performances. Boyd's voice and diction were exceptionally clear and even off stage Ford's voice was commanding. Robert Brubaker as King Herod had some comical moments despite the tragic them and Michaela Martens is absolutely imperious as Herodias.

Pittsburgh Opera had not performed Salome since 2001, and is performed a different production than the previous.  The production is ‘traditional’- meaning that the sets and costumes make it look like the biblical era in which it takes place.

Although the story is extremely tragic, the actions and reactions of the characters were often comedic. Overall it was an interesting and pleasurable opera.  It would be a shame to wait another fifteen years to bring it back.

The Roving Pittsburgher Report is one of sixteen good news segments on the PositivelyPittsburghLive podcast and is one of the good news pages on http://pplmag.com, Pittsburgh's First Internet Radio and TV Network and Pittsburgh's Premiere Podcasting Portal. 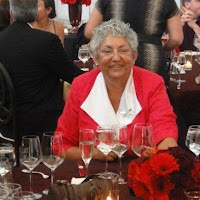 Clarine Lizana is a retired electrical engineer who is a former native of Republic, Pa and returned to Pennsylvania after retirement. She was formerly a training director at Crater Lake Electrical. She now lives in Uniontown, Pennsylvania and spends her retirement crafting, visiting family, golfing and travelling, having just returned from a trip to Italy where "La Trviata" of course was
Posted by Unknown at 4:46 AM