A Christmas Story, The Musical chronicles young and bespectacled Ralphie Parker as he schemes his way toward the holiday gift of his dreams, an official Red Ryder® Carbine-Action 200-Shot Range Model Air Rifle (“You’ll shoot your eye out kid!”). An infamous leg lamp, outrageous pink bunny pajamas, a maniacal department store Santa, and a double-dog-dare to lick a freezing flagpole are just a few of the distractions that stand between Ralphie and his Christmas wish. Chock-full of delightful songs and splashy production numbers, A Christmas Story, The Musical has proudly taken its place as a perennial holiday classic for the whole family. The New York Times writes “I was dazzled. You’d have to have a Grinch-sized heart not to feel a smile spreading across your face.” A Christmas Story, The Musical premiered on Broadway in 2012 and was nominated for three Tony Awards® including Best New Musical, Best Original Score, and Best Book of a Musical. 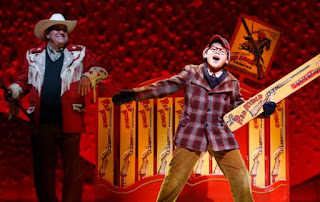 This hysterical musical presents that he will do whatever it takes to make it known that he really wants one. From writing a story about it in school, leaving notes around the house for his parents to even asking Santa-who thinks it's a horrible idea. Thus, the "You'll shoot your eye out kid!" comment.  He'll have to wait until Christmas morning to see if he gets what he wants. This comical rendition of A Christmas story is for all ages and will definitely put you in the Christmas spirit.  It's no wonder that the TV movie version has traditionally amused and entertained families down through generations for years. 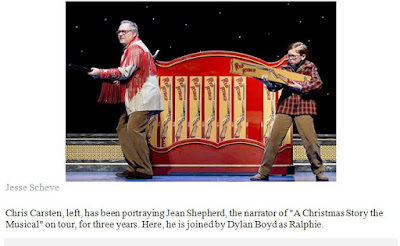 “A Christmas Story, the Musical,” has been adapted from the ever popular nostalgic Christmas movie of the same never.  Ever popular with baby boomers, the desire to see this movie has been passed on from grandparents to grandchildren and even great grandchildren.  Like the movie the musical takes us back to a time when stay-at-home moms were cooks and dressed like Donna Reed.  Pardon the baby boomer mention, for us millennial, look it up.  My mother in law had to tell me this one. Mothers of the time, wiped noses, scolded, ran up to the school which was close enough to do then when the children got into trouble and dispensed sage advice about bullies.

The songwriters, Benj Pasek and Justin Paul and book writer Joseph Robinette sentimentally stayed close to the movie that runs endlessly on TV during the holidays. But they added their own individuality to with big production numbers by choreographer Warren Carlyle and a dozen singing, dancing kids. 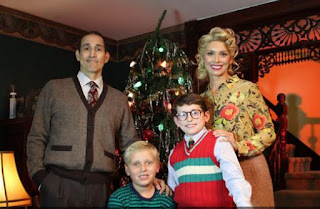 The most fun thing about this musical was the kids.  Often the two Ralphies are onstage together singing about disasters and triumphs and being an older brother and bullies and the general would be malaise of childhood.
“You’ll shoot your eye out,” is an oft-repeated phrase and the title of a big second-act dance number for Miss Shields. Ralphie fantasizes that Miss Shields is a sexy flapper and his schoolmates do a Gene Kelly type tap with an impressive tap solo by Lucas Marinetto.
Just like the movie there are allusions to the horrendously gauche leg lamp that emits “the soft glow of electric sex,” as Ralphie puts it; his pal Flick getting his tongue stuck on a flagpole, the ridiculously fru-fru pink bunny suit sent to Ralphie by a well-meaning aunt and the Old Man’s mumbled curses. 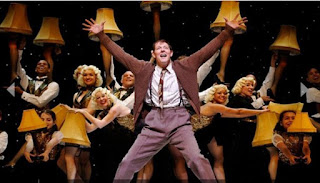 What a musical funfest for the entire family, young and old.  It was a bit edgy and your mind could wonder to adult unsaid content if you let it and there is of course the hysterical slide scene with the bad Santa in the department store but overall it's a funny story narrated by the adult Ralphie which recounts his hysterically amusing childhood which wasn't so hysterical to him.  And then there were the kids and I wonder if they will be as nostalgic about their performances as fans are about the movie and the musical.  Another great feather in the cap of Pittsburgh as it brings grand theater and musicals to Pittsburgh. 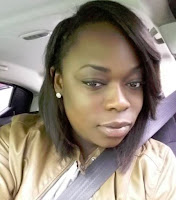 Angel Quinn is a graduate pharmacy technician and business student at Carlow University, a wife, mother and sometimes Wonderwoman and also Hometown Tourist Reviewer for Roving Pittsburgher Report and pplmag.com

The Roving Pittsburgher Report is one of sixteen good news segments on the PositivelyPittsburghLive podcast and is one of the good news pages on http://pplmag.com, Pittsburgh's First Internet Radio and TV Network and Pittsburgh's Premiere Podcasting Portal.