If you were in Market Square at the Holiday Market on December 5, 2016 from 6:00 pm to 10:00 pm, you may have wondered if you were in a time warp that took you back to Halloween. Unsuspecting visitors to the Market Square Christmas Village were treated to a new kind of holiday experience.  Interspersed among the merry making shoppers and visitors were, creatures that appear to be the antithesis of Christmas. 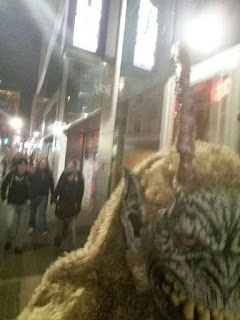 The Krampus Krawl participants who dress as Krampi wear anything from a mask and set of horns to a full blown goat-man costume. Some of the ladies come as «fauns». The wild creatures make quite an impression as they visit each of the taverns on the often improvised route. 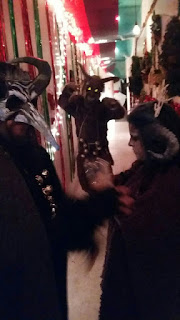 In the movie, a boy who has a bad Christmas ends up accidentally summoning a festive demon to his family home.  When his dysfunctional family clashes over the holidays, young Max is disillusioned and turns his back on Christmas. Little does he know this lack of festive spirit has unleashed the wrath of Krampus: a demonic force of ancient evil intent on punishing non-believers. All hell breaks loose as beloved holiday icons take on a monstrous life of their own, laying siege to the fractured family's home and forcing them to fight for each other if they hope to survive. 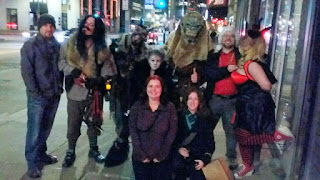 Krampusnacht, a European tradition that honors Krampus, a horned "half-goat, half-demon" who is said to punish misbehaved children during the Christmas season, took place in Market Square on December 5. 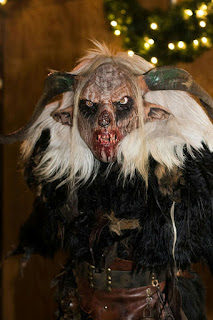 What is Krampus? In German-speaking Alpine folklore, Krampus is a horned, anthropomorphic figure. According to traditional narratives around the figure, Krampus punishes children during the Christmas season who have misbehaved, in contrast with Saint Nicholas, who rewards well-behaved ones with gifts. 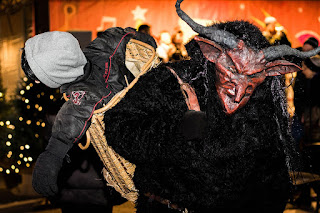 Revelers dressed up as Krampus and posed for photos before embarking on the Krampus Krawl, a bar crawl following the old European tradition called "Krampuslauf." According to the event's Facebook page, "the procession often takes on the appearance of a parade, with the hairy beasts performing for onlookers." There was also a balloon artist and the band The Cheer'ly Men performed for onlookers. 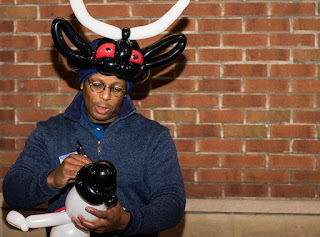 Some 100 people showed up for the miscreant revelry for in many cases, was their first glimpse of Krampus, the horned anthropomorphic figure known in Germanic folklore at St. Nicholas’ counterpart.
“Krampus is a hundred year old European holiday that Mark Menhold brought to Pittsburgh.  Mark wore an elaborate Krampus costume at ‘Krampusnacht,’ Pittsburgh’s first-ever Krampus celebration. Mark is also known for his creative work with Pittsburgh’s popular Zombie Fest. 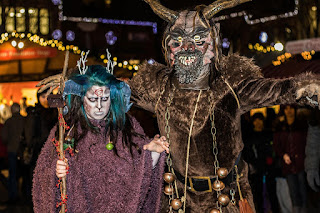 “It’s a little Halloween, a little bit of Christmas.  Santa Claus rewards the good childrenand Krampus punishes the naughty ones. ” Mark was heard to tell onlookers. 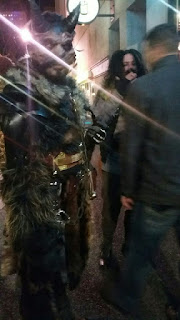 Krampusnacht is traditionally celebrated in many European countries on the Eve of St. Nicholas.  This goat like creature is the exact opposite of Santa Claus and Krampusnacht was followed not by milk and cookies but by a “Krampus Crawl,” a pub crawl that made its way to several downtown bars and taverns where patrons were expected to buy Krampus schnapps for the Krampus impersonators.

Krampusnacht in Market Square was for the naught and the nice to celebrate the holidays in a unique way and for some children to discover that there is a sidekick of Santa Claus who would not just withhold gifts but would also punish them for bad behavior.