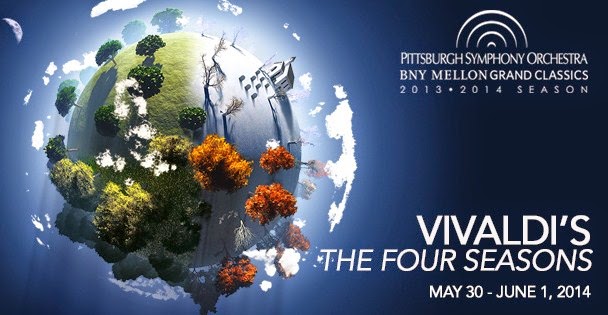 I’ll lead this review off with the tweet that I sent right after the Pittsburgh Symphony Orchestra’s Sunday, June 1st 2014 performance.  “Today was my favorite @phgsymphony concert of the season!  3 great pieces. Ye-Eun Choi was stunning. Loved Loved Loved Nicholas McGegan!”  And, that pretty much sums it up.  In my first PSO concert and review on Jan. 17, 2014 I wrote, “Now of course, I should let on that I’m partial to this era of music and the one before it.  So in my opinion Franz Joseph Haydn and his contemporaries of the first Viennese School hit that sweet spot.”  So you can imagine my excitement about this concert.  Vivaldi, Mozart, AND Haydn, it was like Christmas morning at the symphony.

The concert began with Vivaldi’s Four Seasons and got better and better with each concerto.  Violinist, Ye-Eun Choi making her PSO debut played beautifully.  She showcased both energetic virtuosity and lovely lyric lines full of passion.  She is very young and demonstrates the technical capabilities and musicianship that will develop even more with time like a fine wine.  By the middle movement of Autumn the entire ensemble settled into a groove with smiles and acknowledgements to each other that capture the essence and intimacy of chamber music.  The music was gorgeous and full of energy, but it is taken to a whole other level when you can observe sincere enjoyment of the players.  It was fun to listen to and watch – Baroque music is fun and makes you want to dance, not like the electric slide, but you know a Gavotte, Minuet or Chaconne!

The concert was lead by world-renowned conductor Nicholas McGegan, and for the Vivaldi he did so from the console of the harpsichord.  It was a treat to see the work not only played beautifully but also in this configuration that would more than likely have been how it was performed back in 1725.  The only unfortunate thing was that the big, beautiful Heinz Hall kind of swallowed up the harpsichord.  McGegan evoked both the lush swells of passion-filled themes and clean precision, full of energy, from the small ensemble.  More impressive was his ability to quickly lead the shifts from one style to the other at the manic changes characteristic of Baroque music.

The second half of the concert began with a fun and stately Mozart ditty, Chaconne from Idomeneo, Re di Creta.  It showcased several contrasting sections that were each played with due flair.  The featuring of the woodwinds was really quite lovely.  The concert was capped off with Haydn’s Symphony #103 in E-flat major and was great.  Beginning with its nickname “Drumroll,” the work featured a neat timpani part and great wind passages.  A standout was the violin solo in the second movement by concertmaster Noah Bendix-Balgley.  I love hearing and watching him play; he makes it look and sound so easy.

Did I say I love this style of music?  It makes me feel like Agnes from Despicable Me when she expresses her excitement about the stuffed unicorn, “It’s so fluffy.”  It’s just so fun!  The music was expressive and energetic.  I would imagine the rehearsals were fun and productive, and I would have paid to see them too with McGegan’s commentary.  The PSO rocked it (Baroque and Classical style – you could say they barocked it) and I absolutely LOVED watching Nicholas McGegan conduct!