I Have Seen The Enemy and It is Us 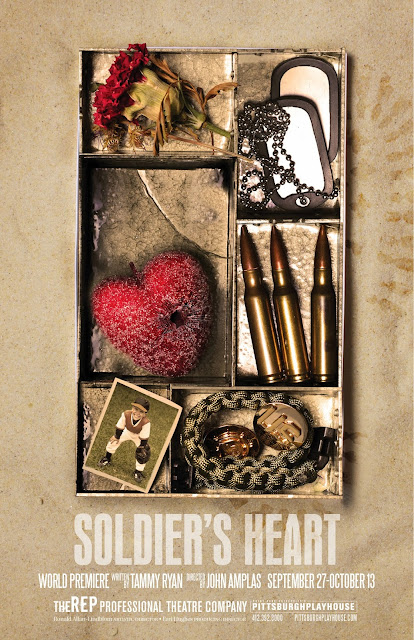 
The REP’s current offering, Soldier’s Heart, is a gritty and intense view into the gender differences in the military.  The play opens with a seemingly realistic, well-adjusted single mother preparing for her first deployment to Iraq.  Casey Johnson, a sergeant in the Marine Corps, has her son Sean’s athletic and academic schedule for the ensuing 9 months calendared and cross referenced by month, along with medical records and pre-recorded stories and letters.  In the interchange with her mother, we become aware that perhaps Casey has something to prove.  Her father, an embittered veteran who spent time in Vietnam, came home a changed man.  Both of Casey’s parents used alcohol to assuage the pain of the downward spiral of their relationship.  Her father left Casey his house upon his death 6 months earlier, to her mother’s apparent resentment.  Casey is estranged from Sean’s father, but he shares custody and childcare with Casey and now with her mother.

In a rapidly unfolding barrage of videos, we get a glimpse into the horrors of war in Iraq.  There are two women in the company; rather than bonding with each other, Casey and Lance Corporal Hernandez appear to spar, verbally and culturally.  The plight of a female deployed in a foreign country is presented with a raw, matter of fact style.  Personal hygiene and the status of women in Iraq reveal underlying tensions that belie the status of woman in the US.


Casey’s return stateside reveals a shattered woman.  She refuses to see her son; she refuses to engage in life.  Her heart has turned from open and accepting to hard and unyielding.  She finds her father’s stash of tequila and liberally partakes to numb her memories of the horrors that she experienced.  She contemplates suicide and disengages from any interpersonal contact.  She can no longer bear to be touched, preferring the isolation of video games and television in which to immerse herself.


Humor relieves some of the dark content.  Kevin, Casey’s ex and "Mr. Analogy", is a spark of reason, appealing to the Casey of old to try to bridge the actions of the mother of his child with this stranger. The secrets of what transpired over the nine months continue to be unraveled and erode our sense of respect and honor for our perceived heroes.


The Studio Theatre of the Pittsburgh Playhouse is the venue for the world premiere of the play, written by Pittsburgher Tammy Ryan and directed by John Amplas.  The staging and lighting are stark and gray, befitting the mood of the work itself and the audience’s reaction.  The use of the same set for both stateside and Iraq was enhanced by the videos projected on the back wall; the videos also served as a flashback mechanism, a graphic demonstration of what Casey encountered in Iraq.

Marie Elena O’Brien is remarkable as Casey Johnson.  The range of emotions that she displays throughout the performance is heart-wrenching.  Joshua Elijah Reese as Kevin is likable; you root for him to be successful in breaking through the shell, helping and supporting Casey in her return to life.  Margie, Casey’s mother, ably portrayed by Jenna Cole, is everywoman, while not perfect, loves her daughter and grandson and tries her best.  Michael Fuller (Captain Baines, Casey’s Commanding Officer), Justin Lonesome (Staff Sergeant Williams), Jaime Slavinsky (Lance Corporal Hernandez), and Sundiata Rice (Sean) round out the small but emotionally powerful cast.  Kudo’s to Rice in his debut as Sean, Casey’s son, who idolizes her and cannot understand their estrangement.  When Casey does not respond to his heartfelt, innocent appeals, we are left to imagine that no one will be able to break through to her.

Casey has seen the enemy…and it is us.

Soldier’s Heart runs through October 13th at the Pittsburgh Playhouse.

Reviewed  on behalf of PositivelyPittsburghLive! Magazine.  Joyce Kane is the owner of Cybertary Pittsburgh, a Virtual Administrative support company, providing virtual office support, personal and executive assistance, creative design services and light bookkeeping.  Cybertary works with businesses and busy individuals to help them work 'on' their business rather than 'in' their business.  www.Cybertary.com/Pittsburgh
Posted by Unknown at 6:32 AM