Review of “Little Mermaid” by a Mermaid Character

Our first review was from a real, live human, but this review is brought to you by a "real, live Mermaid character."

Getting to see Disney’s “The Little Mermaid “Broadway Show was like seeing the animated film as a child for the first time all over again. Only with this show, there are added songs and scenes that give the audience an even deeper look at the story and sticks even more closely with the original Hans Christian Anderson tale of two star crossed lovers and a ‘fish out of water’. The element of dance as “Ariel’s” way to win “Prince Eric’s” affections is pulled from the original story and used in a song about dance being a way of conversation, when one is without the ability to speak. There were explanations in the play that we missed out on in the movie version, which added back story to these already rich characters we know and love. For example, we find out that “Ursula” the Sea Witch is, in fact, “King Triton’s” older sister, whom he banished.

The sets were expertly and seamlessly changed as the audience switches back and forth from the ocean to land. The “Merfolk” ‘swam’ on wires and were in a constant state of undulation to simulate being deep in the sea. They were even able to sing beautifully while swinging above the stage and swaying with the faux currents.  The costumes were sumptuously made of silks and feathers which made them look as though they were swirling in the fathoms below. Black light reactive fabrics were used to give the villains a more sinister appearance.

The entire cast was wonderfully talented but there were two absolute stand outs among them. Liz McCartney who donned an evening gown replete with tentacles was fabulously nasty as “Ursula the Sea Witch”. Ms. McCartney oozed all over the stage and absolutely brings this classic villain to life, her vocals were nearly spot on with the original voice talent. The other stand out was Alan Mingo Jr. in the role of “Sebastian the crab”,  after a rousing rendition of “Under the Sea” I believe the general audience feel was “Sebastian just brought it on home!”.

If you have ever looked out on the Ocean and had thoughts of “Merpeople” or that maybe the sea creatures are doing dance numbers, then this one is a must see for you. Kids of all ages can enjoy the heartwarming message of Love conquers all obstacles. 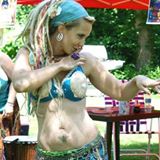 Dancing Nancy, twirler of things aflame at Self, Donsin' Munkee, Jingle Shaker, Cow Bell player. And Mermaid, complete with tail and a sea shell bikini top here.
Posted by Unknown at 11:52 AM