Other Desert Cities Explores the Extremes in Family Dynamics


Pittsburgh Public Theater’s production of “Other Desert Cities” is a study in family dynamics of polar extremes.  The first act unfolds on the morning of Christmas Eve following a family tennis match. The patriarch, Lyman Wyeth and his wife, Polly, are presented as old guard Republicans, conservatives of the far right; their children, Brooke and Trip, are clearly political adversaries, young liberals of the self-righteous left.

Shortly into the first act, we get an inkling of a tragedy that helped to define the tensions in the family that go beyond politics.  As the story unfolds, we hear of an older brother, hero to Brooke, embarrassment to Lyman and Polly, whose anti-war, drug abusing, cult leanings drive a wedge into family loyalties.  Brooke, an author, reluctantly admits that her latest oeuvre is a memoir that presents her version of her brother’s disappearance and probable suicide after a bombing at a military recruiting center leaves one dead.  Is it accurate?  Maybe.  Is it romanticized? Probably.  Is it the last ingredient in the estrangement stew with her family?  Most definitely.

The acting is dynamic; the characters larger than life.  There is familiarity with them, yet strangeness.  The shifting alliances allude to the dynamics that face all families.  Lyman, a former actor turned politician turned ambassador turned man of leisure (or is that man of torment?), is brilliantly portrayed by James DeMarse.  His loyal wife, suggestive of Nancy Reagan, is a bit more strident in her opinions and pronouncements.  Polly (Helena Ruoti) and her former screenwriting partner, her sister Silda (Susan Cella), were successful with a series of movies, the Hillary chronicles.  Silda and Polly, originally from Texas, may bear a family resemblance and similar upbringing but they are polar opposites on other characteristics.  Silda is recuperating from a recent stint in rehab at her sister’s home.  She reluctantly and sarcastically accepts the situation that her life has become, intermixing wisecracks with self-deprecation.  The comic relief is tinged with sorrow – or perhaps guilt - with her role in her nephew’s downslide from upper middle class trust fund baby to societal pariah.

Brooke (Pilar Witherspoon) is a distraught, freelance author who lives on Long Island, as far away geographically and emotionally as she can be .  She eschews financial help from her parents, preferring to go it alone on a more modest scale that her parents struggle to understand.  Her emotional history is unveiled.  The audience hears of her being institutionalized with hints of the instability rooted in her childhood.  Her brother, Trip (John Patrick Hayden), a reality TV producer, provides some evenness in contrast to Brooke’s uber emotionality.  He, of all of the characters, seems to be the one with the least baggage. 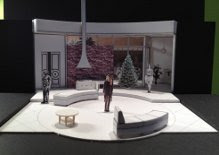 The setting of the living room with its stacked stone fireplace reflective of the colors of the desert as a backdrop to the open fire pit is reminiscent of old Hollywood, Rat Pack era.  You expect to see Frank and Dean stroll in the sliding glass doors.  The name dropping of the California elite who are the quintessential representatives of the sixties and seventies, bridge the fantasy with reality.  The elegance of the crystal decanters and tumblers are in sharp contrast to the ruggedness of the walls, the silk and Pucci of the older generation to the jeans, shorts and T shirt of the younger.

PPT’s playbills, in addition to listing the cast and creative staff bios, season sponsors and advertisements, provide some context for the work that is presented.  For “Other Desert Cities”, the audience is treated to a match game of political contrasts (Al Franken in the same quiz as Shirley Temple Black) as well as descriptions of the individuals and venues that are the name dropped references, the likes of Totie Fields, Dinah Shore, the Brown Derby and Mrs. Annenberg.

“Other Desert Cities”, where families put the ‘fun’ in dysfunctional.  See if you recognize traits of your own.

“Other Desert Cities” is the final production in the 2012-2013 season for PPT.  It runs through June 30 at the O’Reilly Theater.

Reviewed on behalf of Positively Pittsburgh Live Magazine by Joyce Kane.  Joyce  is the owner of Cybertary Pittsburgh, a Virtual Administrative support company, providing virtual office support, personal and executive assistance, creative design services and light bookkeeping.  Cybertary works with businesses and busy individuals to help them work 'on' their business rather than 'in' their business.  www.Cybertary.com/Pittsburgh
Posted by Unknown at 7:37 AM