The Pittsburgh CLO’s production of Kopit & Yeston’s Phantom combines enough of the drama of the more well-known Andrew Lloyd Webber version of the love story to be reminiscent yet is unique enough in its handling of the story to stand apart.

Based on the Gaston Leroux novel “Le Fantome de L’Opera”, Arthur Kopit’s book and the theater version provides more of a character study into the back story of the why of The Phantom.  In the K&Y version, The Phantom is more humanized and has a name, Erik.  While he skulks backstage, on the catwalk and in the underbelly of the famed Paris Opera House, his character is portrayed with more sensitivity, evoking empathy rather than horror.  His story, revealed in the second act, provides insight into a much more likeable, even playful character.  The K & Y version is essentially more accessible to the audience.

I did take issue with one aspect of the second act revelation of Erik’s story – not the story itself, but on relying on the ballet convention a la “An American in Paris” or “Oklahoma”; it felt a tad trite for my taste, a less than novel treatment to expose how the legend of The Phantom came to be.


Another departure from the more popular ALW version is a broader cast, with effective use of the ensemble, and without the need for the more dramatic special effects that characterize the better known variation.  I found that I preferred it.  The music and lyrics by Maury Yeston, while less recognizable, were still effective to weave the story of the young ingénue, Christine Daee.  Initially relegated to the wardrobe department, she rises to the position of lead under the tutelage of Erik, unbeknownst to the conniving and controlling La Carlotta, the quintessential diva.  Despite her lack of talent, Carlotta (Donna Lynne Champlin) is the feted queen of the Opera House, due solely to her husband’s wealth and the currying of well chosen benefactors who continue to support the opera despite repeated failures of the productions.  This production has a fair bit of humor mixed in the dialogue, giving the audience even more entertainment and causing me to comment at intermission that I preferred it over the noir version that I had seen numerous times. 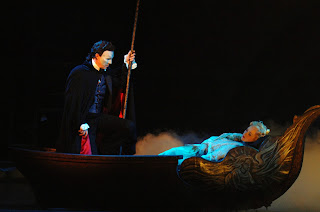 The lovely soprano of Erin Mackey as Christina melodiously blends with Ron Bohmer’s (The Phantom) tenor.  Veteran Jaime Ross as Gerard Carriere, the former Opera House manager, is credible as Erik’s mother’s married lover and subsequent protector of Erik.  You feel his emotional tug of war as he at last reveals his parentage and performs the ultimate paternal act in the final scene.
The character of Philippe de Chandon (Bryant Martin) first discovers the talents of Christine and urges her to develop her voice with vocal training.  He becomes smitten with his discovery, leading to a jealous reaction on Erik’s part.  Thus spins the love story between two unlikely characters, the beautiful Christine and the disfigured Erik.

On opening night, the audience responded well to the production, delivering a standing ovation to the cast.  If you get the chance to see this alternate production of the Phantom, do take advantage of the opportunity while it is in town.  The show runs through June 30, 2013 at the Benedum.

Reviewed on behalf of Positively Pittsburgh Live! Magazine by Joyce Kane.  Joyce  is the owner of Cybertary Pittsburgh, a Virtual Administrative support company, providing virtual office support, personal and executive assistance, creative design services and light bookkeeping.  Cybertary works with businesses and busy individuals to help them work 'on' their business rather than 'in' their business.  www.Cybertary.com/Pittsburgh
Posted by Unknown at 3:40 AM