Trilolgy of Syles at the Ballet 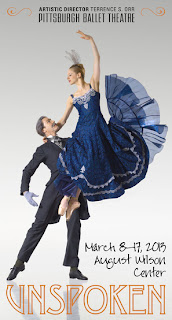 Ballet at the August Wilson Center? Yes, even on the Franco Harris Stage.
Pittsburgh Ballet Theater is creating a prodigious amount of work this year. One wonders how they remember all their steps while learning the moves of the next performance. They couldn't possibly learn these pieces so fast… could they?

Last night, presenting "Unspoken," which consisted of three pieces. The first, Serenade, set to Tchaikovsky's Serenade for Strings in C, Op, 48, a hauntingly uplifting piece, was originally choreographed by George Balanchine. While PBT brought in stage director (and veteran Antony Tudor dancer) Donald Mahler, a "repetitor" from NYC to maintain the integrity of Balanchine's work, PBT made it their own. The Corp sculpted the stage with their bodies. The ethereal quality of the music, the movements of the dancers and the high stage ceilings raised the viewers to an "other worldly" consciousness. The costumes were simple, yet aesthetically pleasing. There was no scenery to distract from the elegant scenes the Corps presented through their body movements and interactions with each other as they gracefully danced en pointe, jumped and did precision lifts and turns singularly and in unison. The lighting enhanced the overall beauty of the production.


Second on the program was a piece originally choreographed by 20th century icon, Antony Tudor. Jardin Aux Lilas (Lilac Garden) a love story set to the music, Poem for Violin and Orchestra, Opus 28, written by Ernest Chausson. Again the "repetitor" was brought in to retain the integrity of the original.


Third on the program was a Pittsburgh premier of a Mark Morris dance, Drink to Me Only With Thine Eyes set to 13 etudes by Virgil Thompson and performed live by PBT Company pianist Yoland Collin. Some of the music was "folky" and some was "quirky" while the dancing reflected the setting of the music. This piece deviated the most from classical ballet which seemed appropriate given the 20th Century setting of the music.

Overall the performance had a strong "blood flow," pumping excitement throughout the audience. After the last curtain we definitely felt our minds were raised to a higher level of excitement. If you haven't gone to see the Ballet, please do yourself a favor and see one of PBTs performances. Many Pittsburghers are proud of their Ballet troupe and rightly so. 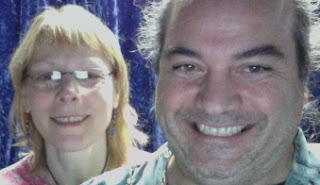