Roving Pittsburgher Report, Wilkommen to "CABARET" AT THE BENEDUM CENTER

Wilkommen to "CABARET" AT THE BENEDUM CENTER 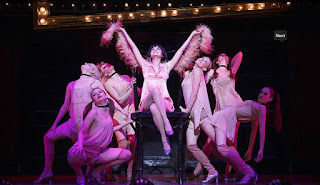 The air was electric as we waited for the show to begin!  This was the first time in our simple career of attending shows in the Cultural District that we really noticed the audience’s feel of anticipation and awe of what was to come.  My husband,Dr. Santosh Pandit or Mr. Cardiology, as 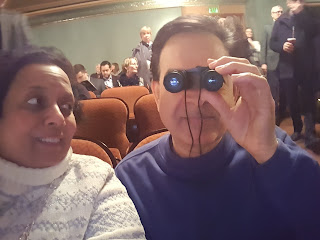 he has been dubbed, got busy right away using the opera glasses to watch the unusual activity on the stage. There were actors limbering up and actually doing cartwheels and splits! I can understand his curiosity because the gals on stage looked from our seats in row Q as though they were wearing nothing!  They were all wearing skimpy clothing in flesh colors… I noticed the stage had a second story where it was filled from end to end with musicians… or were they the actors… ohhhh they were doing both! 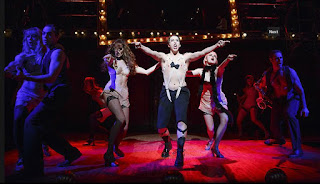 The swell of the audience’s energy climaxed as the lights dimmed.  The lead, Emcee – Randy Harrison came out from behind a door and started to sing.  Oh but I could not understand his words. I wanted to adjust the acoustics so that I could lower the music and hear him clearly.  It was worse for my husband as he does not understand French!  But to my delight, the loud music became a minor detraction as the actors outdid themselves in producing their heart felt performances.

Pittsburgh is in for a real treat with this rendition of Cabaret.  For those like Mr. Cardiology who did not grow up in America… do a little reading so you can follow the story better and that way you can concentrate on appreciating the performances.  Well worth more than the price of the tickets… My favorite was Fraulein Schneider – Shannon Cochran… singing ‘So What’… with Sally – Andrea Goss singing ‘Don’t Tell Mama’ a close second!  Randy Harrison as the Emcee was actually like a band leader in his ability to keep the energy level at peak for the entire performance… made me think everyone else was making sure they kept up! BRAVO!

To all the cast and crew my Hats Off to YOU! Congratulations and Thank You for coming to Pittsburgh and allowing us to ‘Get Away’ from our daily routine… 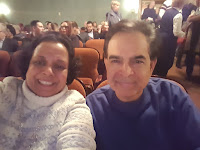 Sunita Pandit, host of Mrs. Cardiology which is an anchor podcast at http://pplmag.com is also the practice manager for her husband Santosh Pandit's private cardiology practice in the North Hills of Pittsburgh, she is also the Health Director on the Board of NAWBO Greater Pittsburgh. Dr. Santosh Pandit is a private practice cardiologist in the North Hills of Pittsburgh.
Posted by Unknown at 5:11 AM