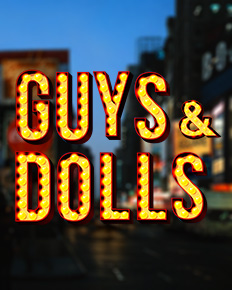 When Pittsburgh Public Theater (PPT) produces a musical you are sure to be wowed.  This season, the American classic, Guys & Dolls will not disappoint.  An audience pleaser all around, Guys & Dolls is entertaining for both the musical maven as well as any theater novice.  Producing artistic director, the esteemed Ted Pappas, has covered all the bases to assure this performance is nothing less than stellar. Guys & Dolls is a must see.

One of America's most beloved musicals, Guys & Dolls takes place in mid-century bustling New York City.  Small time gambler Nathan Detroit (Joel Hurt Jones) is scrambling  to find a location for the next floating crap game, while dodging Lt. Brannigan (Tony Bingham) and  Miss Adelaide, (Kirsten Wyatt) leading performer at the Hot Box night club and his fiancée of fourteen years.   With help from fellow hoodlums Nicely, Nicely Johnson (Quinn Patrick Shannon), Rusty Charlie (Joe Jackson) and Benny Southstreet (Gavan Pamer), Detroit attempts to arrange the game at the Biltmore Garage.  Owner Joey Biltmore (Daniel Krell) wants a $1000.00 deposit before he agrees and Detroit is broke.   He decides to earn the $1000.00 by making a wager with Sky Masterson (Charlie Brady) a man who will bet on anything. Detroit bets Masterson that he can't convince the beautiful and pious, Sarah Brown, Sergeant of Save- a- Soul Mission, to take a trip with him to Havana, Cuba.  Masterson, accepts the challenge. What follows is a quest for love and redemption depicted through an award winning score and clever choreography.

The four leading roles, Nathan Detroit, Sky Masterson, Sarah Brown and Miss Adelaide boast notable credits ranging from live theater,  film and television, national as well as local theater.  The leading ladies are exactly what you would expect from a PPT production, refined and skilled in their craft.  Burn's operatic vocal range is resounding and at times nearly drowns out her male counterparts.  Kudos to Wyatt whose New York accent is on spot. She manages to maintain it throughout the entire performance, something I have witnessed many talented men and women struggle with on stage.   Masterson, a ladies' man, can schmooze a woman and roll a set of dice, sing and dance too.  His rendition of “Luck Be a Lady” was a highlight of the show but my heart melted listening to Miss Adelaide and Nathan Detroit sing the duet, “Sue Me”, it was sweet and harmonic.
Although there isn't one single cast member who disappoints, the supporting cast and ensemble are especially brilliant. The beautiful Hot Box girls, as Farmerettes, in “A Bushel and a Peck”, are just the right amount of risqué.  Sarah's grandfather, Arvide Abernathy (Larry John Meyers) sings “More I Cannot Wish You”, a sentimental tune that warms the heart and Nicely, Nicely Johnson and the ensemble receive a roar of applause after “Sit Down, Your Rockin' the Boat”. 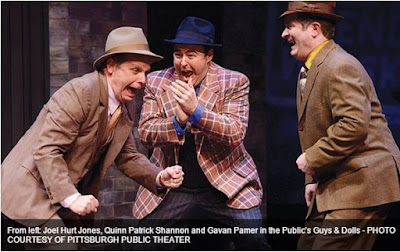 The O'Reilly Theater has a mid-sized stage and the choreography is tailored to the space.  Personally, when I see a strong male cast I look forward to powerful leaps and turns.  The dancing in Guys and Dolls doesn't lack these attributes but there were moments when I expected  larger.  The dancing was most engaging during “Havana” and “The Crapshooters Dance”.

For more information or to purchase tickets visit http://trustarts.culturaldistrict.org/production/44232/guys-and-dolls 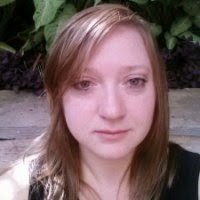