Clybourne Park, the Pulitzer Prize (2011) and Tony Award winning play by Bruce Norris, is a tale of contrasts; contrasts in race, beliefs, social circumstances, fashion and style and, most importantly, time.

Act One is set in the late 50’s at the home of Russ and Bev (Brad Bellamy and Lynne Wintersteller).  They are clearly middle class.  Silver candlesticks and a chafing dish grace the dining room built-in server, ready to be packed for their imminent move to suburbia and the nirvana of a 6.5 minute commute to Russ’s new corner office.  Bev, a cross between Laura Petri and Lucille Ball, chastens – no nags – Russ out of his apparent funk.  It is early afternoon and Russ remains in his pajamas, eating ice cream from the carton, a tad Archie Bunker-esque ensconced on his throne.  Their retainer, Francine (Chandra Thomas), is anxious to leave.  She has come to assist them with their move on a Saturday and would prefer to be unseen and unnoticed, not dragged into the dark issues swirling in the home.  Through the seemingly well-intentioned visits of the simpering Pastor Jim (Jared McGuire), pretentious Karl (Tim McGeever), and deaf and clueless Betsy (Megan Hill), the story unfolds to reveal the parents’ guilt and self-loathing over their son’s suicide after his return from the Korean War.  Karl and Jim are appalled to learn that Russ and Bev’s home has been sold to a family of color, the first in the neighborhood.  They are even more appalled that he doesn't care.


Fast forward 50 years later and the same home is the heart’s desire of a young couple who are anxious to move back to the city, welcome their child and herald the gentrification of Clybourne Park.  However, their version of gentrification is a forklift upgrade of the property, losing the historical integrity of the neighborhood in favor of a spacious open concept, multi-story edifice, just as their version of race relations doesn't quite match how others may feel.  Political correctness replaces the veiled messages of fifty years earlier, the styles of the 50’s are transformed to the more casual shorts, tees and leggings, and the ever-present mobile devices are more important than human interaction.  The change in social standards is mirrored in the transition from the crystal glass of iced tea to the pop-top beer can and Starbucks vente.


While everyone circles around the issues, particularly of class and race, and Lindsey tries to prove her liberal views of race relations, Lena delivers the ultimate put down:  It isn’t a matter of race; it’s a matter of taste

The second act has a surprising ending and brings the story full circle to the causal impact of Kenneth’s suicide, a microcosm of chaos theory that starts a chain of events that could not be predicted.

The cast is to be commended for playing multiple characters between the two acts, all tied together by the house that is the stage and the set.  Bjorn DuPaty (Albert/Kevin) plays a small but pivotal role in bringing clarity to language rendered muddy by obfuscation and political correctness.  He focuses a laser on the hypocrisy of Ken and Jim, Lindsey and Steve.

Throughout the play, the dialogue engages the audience, evoking humor and embarrassment, recognition and discomfort.  The mood of the play moves seamlessly from a bluesy ballad by Frank Sinatra to the stimulation of Hip-Hop of current times.

The Playbill offers several, upcoming local examples of ‘white flight’, ‘gentrification’, and ‘economic eviction’.  Though Clybourne Park is set in Chicago, we are left to wonder how often the pathos of Clybourne Park has been played out in the gentrification of the neighborhoods of the Mexican War Streets, Manchester, NorthSide, Lawrenceville and SouthSide. 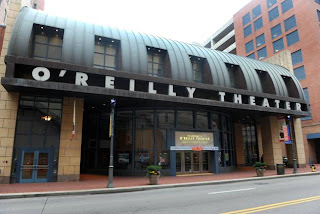 Clybourne Park continues at the O’Reilly Theater through May 19th.

Posted on behalf of Positively Pittsburgh Live Magazine.  Joyce Kane is the owner of Cybertary Pittsburgh, a Virtual Administrative support company, providing virtual office support, personal and executive assistance, creative design services and light bookkeeping.  Cybertary works with businesses and busy individuals to help them work 'on' their business rather than 'in' their business.  www.Cybertary.com/Pittsburgh