John Pournaras
It was a dark and stormy night…. (I always wanted to write that in a story).   But the rain did not keep the fans from dancing in the plaza in Market Square once it cleared.

I received a call from my good friend Joanne Quinn Smith who said that Billy Price was playing at Market Square, in Pittsburgh.  In this era of pop music that isn’t so pleasing to my ears, I agreed to (rather quickly) to an evening of sweet soul music, from Pittsburgh’s Soul Man, Billy Price and his band.
We got there right after the down pour and shuffle off to Nola’s.  Once they squeegee off the table and chairs, we order something to drink.  The rain cooled things off.  We decided to have some soup and right when we ordered it a familiar face walked by us.  I excused myself and went to see if that familiar face was indeed who I thought it was.  Indeed, it was!  It was George Takai!  You might remember him from Star Trek as Mr. Sulu or Celebrity Apprentice.  I introduced myself and gave him a hug and George resounded with his trademark “Oh My!”  After we talked a bit I asked him if he would meet a friend of mine.  He agreed and we went to see Joanne.
She was star trek star struck when I introduce George to the Techno Granny herself.
Ok Mr. Sulu, back to the Billy Price Band……The Billy Price Band started the show with their soulful version of Eric Clapton’s “Further UP The Road” and they never stopped until they were done with their playlist for the evening.  As Geoffrey Himes of the Washington Post has written, "Unlike so many blues revivalists, Price is not an imitation of better singers--he's the real thing."
Members of the Billy Price Band are Steve Delach (guitar), Jason Hollar (bass), Dave Dodd (drums), Jimmy Britton (keyboards), Joe Herndon (trumpet), Eric DeFade (tenor sax) and Rick Matt (baritone and tenor sax).  Joe, Eric and Rick blew their brains out with their horns that evening.  And for Billy, he is still the blue-eyed soul man from Pittsburgh.  He is an institution!

After the show Billy and I chatted and talked about his current tour throughout the area.  It was good to see you again my old friend. 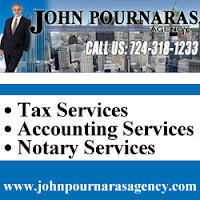 John Pournaras is the owner of 63 year old family accounting business in Ambridge, Pennsylvania.  He is an accountant and info marketer who has invented a trademarked system for Notaries and Accountants to Market Their Business Year Round.  He also serves as a notary and is connected with Penn Dot for titles, transfers and plates.
John Pounaras Agency
651 Merchant St
Ambridge,PA 15003
(724) 266-7078
http://johnpournarasagency.com
Posted by Unknown at 7:23 AM