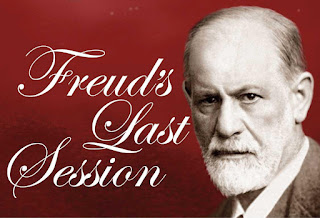 Freud’s Last Session
On the day that Great Britain declares war on Germany, two intellects spar on the topics of God, religious beliefs, life and yes, sex.  Renowned psychoanalyst Sigmund Freud, a recent emigrant from Vienna, shares his recreated office in London replete with the proverbial couch with Oxford professor and author, C.S. Lewis.  Freud, the non-believer (despite having a Catholic nanny who augmented his Jewish upbringing by exposing him to the rituals of the Catholic Church), verbally thrusts and parries with Lewis throughout the dialogue on the wide range of topics.  The exchange is witty and entertaining, drawing the audience into the discussion.  The venue of the O’Reilly Theater works well to promote the intimacy of the conversation.
The meeting between the two grew from the imagination of author Dr. Armand M. Nicholi and was converted to this medium by playwright Mark St. Germain.  The setting is true to history in time and place and lends credence to the possibility of the interchange.   Lewis arrives with gas mask in hand; Freud’s is stashed in a desk drawer so that when the air raid signal sounds, they are both ready.
The radio plays a pivotal role in moving the dialogue, with its fascinating twists and turns, forward.  Freud is 83 at the time and living with mouth cancer and a device that is painful yet necessary.  Lewis is 41, a recent convert to the Church of England after declaring himself an atheist in his mid-teens, is a celebrated author and Christian theologian.
They both travel in circles of brilliance.  Freud, at the end of his storied career, is highly reliant on his daughter Anna.  Lewis names J.R.R. Tolkien and G.K. Chesterton among his colleagues.  Through the course of their conversation, they explore arguments for and against the existence of God that lead to an examination of the very meaning of life.  Lewis, a veteran of the First World War, is reluctant to discuss that experience; Freud, as the end of his life looms, is wrestling with pain and fear of death.  From these divergent backgrounds and life experiences, they begin to establish a relationship founded on respect, if not common views.
Freud’s Last Session is at The Pittsburgh Public Theater’s O’Reilly Theater from March 1st through April 1st.

Reviewed by Joyce Kane
Joyce is the Owner of Cybertary Pittsburgh, a Virtual Administrative support company.  Cybertary works with businesses and busy individuals to help them work 'on' their business rather than 'in' their business.
Posted by Unknown at 1:45 PM