The Mask of Moriarty...Catch it While You Still Can 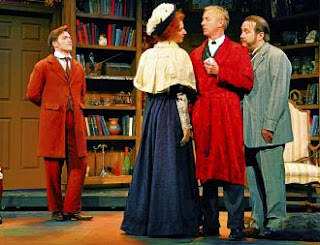 It’s Elementary at The Mask of Moriarty
The elements were all present for an enjoyable performance of the Mask of Moriarty.  Mystery, intrigue, humor, plot twists, lively dialogue, credible casting, period costuming all characterized the Pittsburgh Irish & Classical Theatre’s production of the Sherlock Holmes tale.
It may help to be a fan of Arthur Conan Doyle and his famous sleuth to understand some of the more esoteric references sprinkled throughout the dialogue; from the audience’s reaction, though, the subtext of the story was strong enough to be independent of the full body of work featuring the classical mental duel between Holmes and his arch nemesis, Professor Moriarty.
The staging and sets were impressive, enhanced by the incorporation of the stagehands as recurring and vocal characters (the O’Shaughnessy Brothers).  While sometimes this device can seem contrived, this production was instead enhanced, especially since one of the ‘brothers’ was an Emily.
The opening scene on the Waterloo Bridge transported the audience to Victorian London with the thick fog and eerily lit silhouette of Big Ben.  Holmes’ lair at 221B Baker Street was so faithfully recreated you could envision how his critical deductions based on the’ power of observation’ found inspiration.  Indeed, Sherlock demonstrated his impressive power of observation in deducing the status of Watson’s circumstances yet seemed oblivious when the faithful ‘everyday innocuous sinister family retainer’  tried to get his attention in the Melmoth Castle crypt.
Speaking of Watson, he literally stole the show with his unique costume choice (selected by Sherlock  Holmes, of course) in the fourth act, holding the audience in his silk clad hands through the final act.
The intimacy of the Charity Randall Theatre within the Stephen Foster Memorial enhanced the audience’s experience with the play.  The troupe demonstrated great flexibility with several of the actors assuming multiple roles.  The recurring themes castigating the intelligence of the British Bobby, Constable Travesty, and the ever-bumbling Inspector Lestrade kept the audience engaged, wanting more.
The cast’s enthusiasm for the Hugh Leonard script showed they enjoyed performing as much as the audience enjoyed the performance.  The Mask of Moriarty is a Holmes & Watson caper not to be missed.
The PICT’s Mask of Moriarty continues through December 17.

Reviewed by Joyce Kane
Joyce is the Owner of Cybertary Pittsburgh, a Virtual Administrative support company.  Cybertary works with businesses and busy individuals to help them work 'on' their business rather than 'in' their business.