This Dragon Roars on the Shore 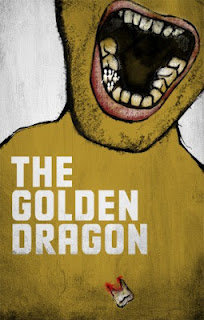 This Dragon Roars on the Shore

Opening night of the Quantum Theatre’s production of The Golden Dragon took place on the ‘shore’ of Lake Carnegie in Highland Park.  Lake Carnegie, for the unfamiliar, sits in the Park near the swimming pool, above the Pittsburgh Zoo and Aquarium.  It started out as an interim pumping station for the Reservoir.  Quantum Theatre built stadium seating directly in front of the dock to accommodate the audience.

The playwright, Roland Schimmelpfennig, explores the accident of destiny and the interchangeability of experience, as well as multi-cultural understanding and prejudices – wrestling with “otherness” in this work.   The prominence of globalism and nomadic behavior drives home the message that we are all “inexorably linked”.   This message is timely, given the 2012 London Olympics as a backdrop in time.

The staging was simple yet effective.  The Thai-Chinese-Vietnamese restaurant that lent its name to the play was forged from a few pots and kitchen utensils at center stage.  The attached floating pads became alternatively apartments, the front of the house for the restaurant and foreign lands.  The production is to be commended for taking advantage of the venue and transforming it.

The allegory of the Ant and the Cricket, reminiscent of a very dark Aesop’s Fable, was initially lost on me.  I eventually ‘got’ it, but perhaps not as quickly as the playwright intended.  With the sound of crickets (live or piped in…I can only speculate) enhancing the story, the audience was pulled through the disturbing fable.  Speaking of dark, the fundamental themes of illegal immigration and sex slavery are not traditionally uplifting, and this production makes no apologies for them continuing in that less than perky vein.

What was truly fascinating and captivating about the production was the manner in which the five actors seamlessly transitioned to different characters and genders throughout the eighty minutes.  Simple props – a striped shirt, stewardess jackets, a red dress – and the changing role of narrator led the audience through the storyline.  The redundant insertion of the catch phrases “short pause” or “long pause” were unnecessary in my view and didn’t add anything for me, after the first one or two.  The director, Karla Boos, describes them as …”to reveal the mechanics, like a beat-changing pause; to create the machine-like world of this kitchen via repetition.”  The repetition of the lists – ingredients, locales, etc. – enhanced the inclusion of the audience in the tale, strengthening the bond between storyteller and spectator.

One criticism that I would offer is the gratuitous inclusion of a sexual epithet for the stewardess’s lover – I found it unnecessary and excessive, adding nothing while for me, jarring and actually detracting from my enjoyment.

The production of The Golden Dragon runs from August 2nd through the 26th.  I would encourage liberal use of the insect repellent thoughtfully provided by Quantum Theatre.

Posted on behalf of Dreamweaver Marketing Associates.  Joyce Kane is the owner of Cybertary Pittsburgh, a Virtual Administrative support company, providing virtual office support, personal and executive assistance, creative design services and light bookkeeping.  Cybertary works with businesses and busy individuals to help them work 'on' their business rather than 'in' their business.  www.Cybertary.com/Pittsburgh
Posted by Unknown at 8:59 AM